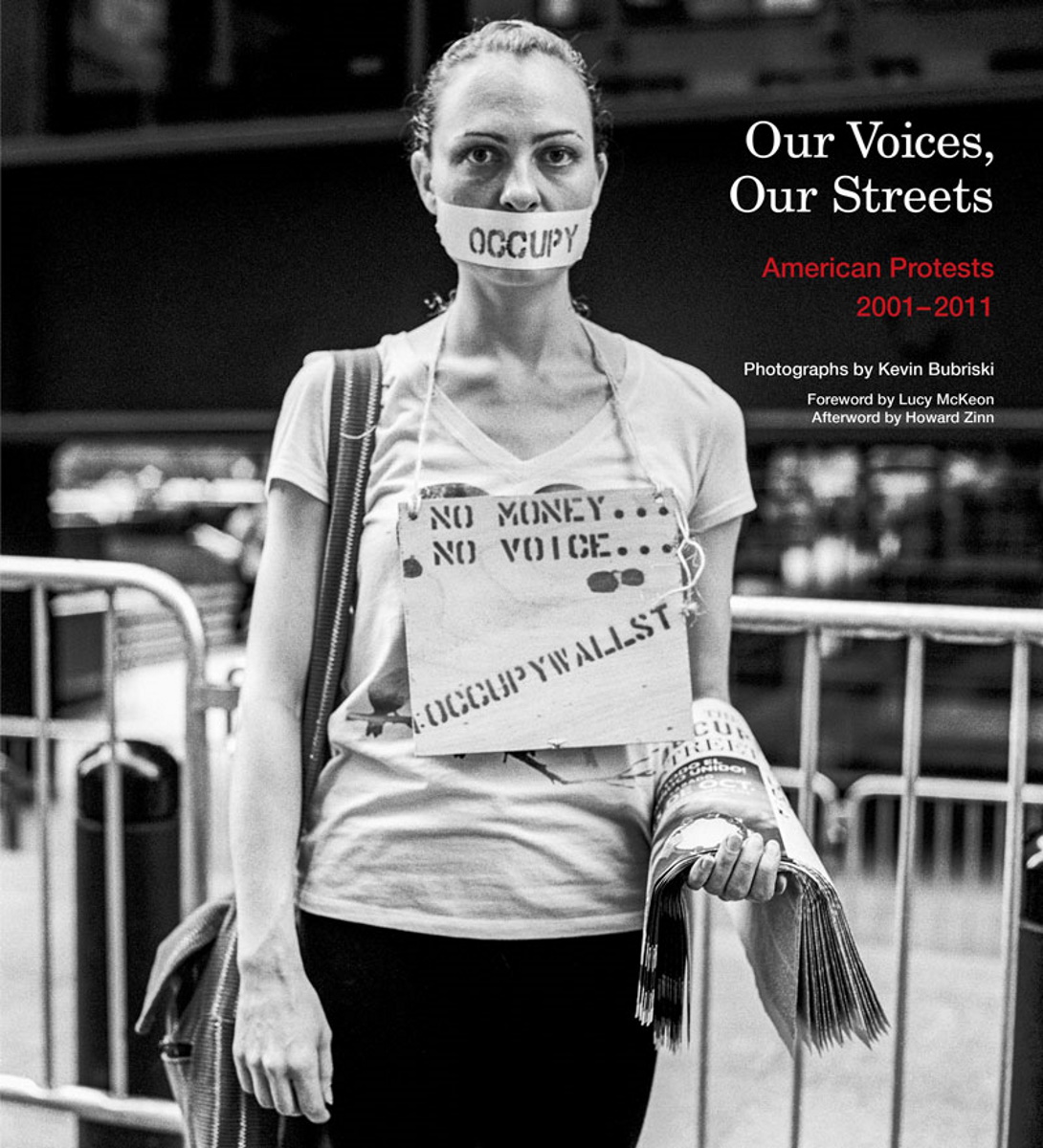 Protest is a form of expressing one’s opinions. It allows people who share the same view(s) to rightfully assemble with others to voice complaints and ideas. Bubriski’s book, “Our Voices, Our Streets: American Protests 2001-2011”, looks back at that decade through photographs united by common denominators: the lens of the Hasselblad camera and the public stage of the American streets.

Since the country’s founding, the American streets have been vibrant spaces for political and cultural expressions. They have also been places for demonstrations and protests. The First Amendment of the United States’ Constitution protects freedom of speech, religion, press, assembly, and the right to petition, and prohibits any restriction of private and non-governmental persons and entities.

The first decade of the 21st century was marked by political, social, and economic events that made the American Streets a public platform for demonstrations. It was a period that witnessed several wars, terror attacks and economic disparity. The selection of photographs documents public protests over one decade on the streets in Vermont, Washington D.C., New York and Massachusetts. The timeline begins with the inauguration of George W. Bush in January 2001, after Al Gore was prevented by the US Supreme Court from being elected, and ends in Autumn 2011 with Occupy Wall Street.

Feelings, such as anger about social and political setbacks, have become more pronounced, and various opinions more resonant. Capturing aspects of people’s daily lives is what makes photography different. Families of soldiers in the line of duty, veterans, relatives of the victims of the 9/11 catastrophe, security staff, anti-war activists, and marginalized minorities. Bubriski’s sharp eye and moving sensibility catch key moments of protest, making the portraits quiet and powerful at the same time.

Flags, roses or crosses, photos of missed beloved ones or the Twin Towers of the World Trade Center accompanied the protests either on T-shirts or posters with slogans such as “No More War” for the 2006 peace demonstration, or “Let not Our Nation add to the Inhumanity of our Times”, and “How many more must die” during the 2005 anti-war march “IRAQ Veterans against the war”, and “It takes a Bomb to Raze a Village” during that of 2003.

Bubriski’s street portraits show a diversity of American protesters – in terms of gender, skin color, beliefs, needs, and political persuasions and views – illustrating what Howard Zinn (2006) writes in the book’s afterword: “True patriotism, true love of the country, means being true to the ideals of peace and justice, and not to the politics of the governments.”
Photos From “Our Voices, Our Streets: American Protests 2001-2011” by Kevin Bubriski, published by powerHouse Books © with courtesy 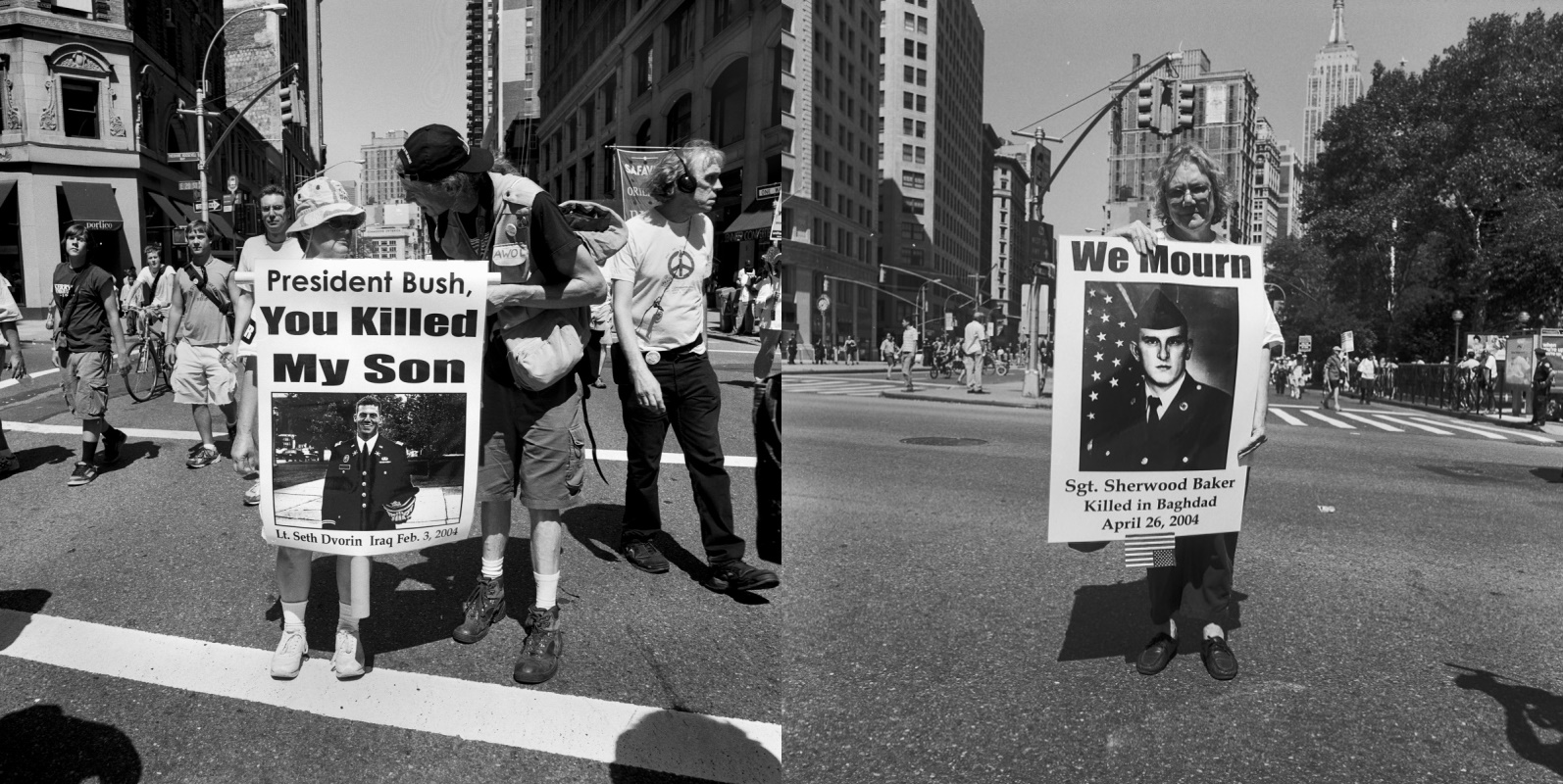 The portraits of the protesters include images of grieving parents of U.S. soldiers who lost their lives during the Iraq War.
Photos From “Our Voices, Our Streets: American Protests 2001-2011” by Kevin Bubriski, published by powerHouse Books © with courtesy

Bubriski’s book was published shortly before the “Black Life Matters” protests which brought racial discrimination beyond the American streets. The waves of dynamic and intuitive anger have redrawn the image of urban streets in a way hardly witnessed before. Worldwide, protests have taken place amid the COVID-19 pandemic that has (re)defined and (re)shaped the way people come together or come apart.

The photographs are carefully framed with the analogue, bulky Hasselblad film camera, processed, and printed in the darkroom. As Lucy McKeon writes in the foreword of the book (p. 13), she imagines Bubriski there, where people gather for protests, “making images to help us remember as clearly as possible this next chapter in American History”.

Photographs are a documentation of the present and historical material for the future. “Our Voices, Our Streets” is an exceptional witness for revising how people protest and speak out their opinions on the streets. Bubriski’s photos movingly capture the unrest in recent American history.

Howard Zinn (1922-2010) was an American historian, playwright, philosopher, and activist. He wrote over 20 books on a wide range of topics, such as race, class, war, and history, including his best-selling “A People’s History of the United States” (1980). Zinn has been quoted as saying, “protest beyond the law is not a departure from democracy; it is absolutely essential to it”.