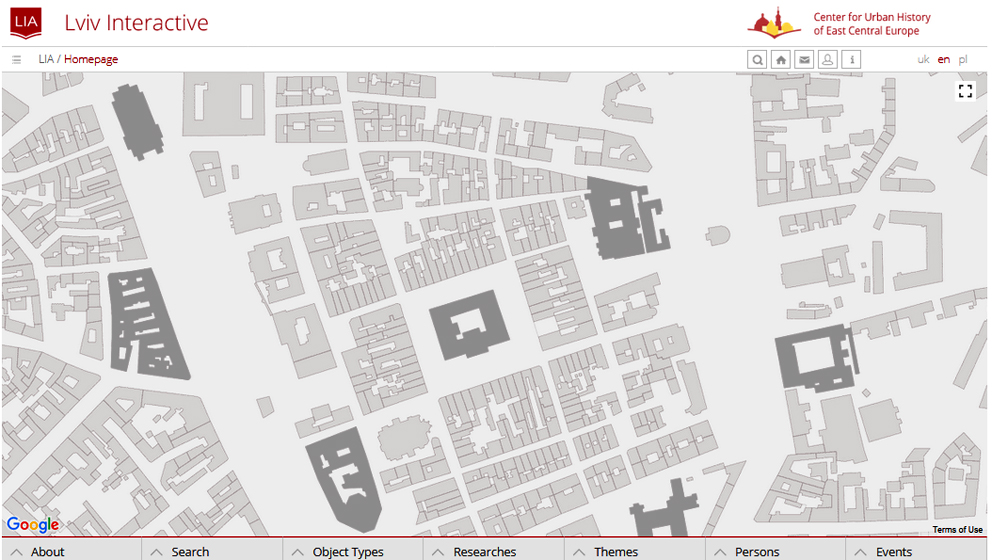 The field of history has been constantly changed by technology. It happens in a much more complex way, however, than simple digitization of sources. On the one hand, digital history is a field of knowledge production and communication among scholars. On the other hand, it is a methodological approach, formed by the potentialities of hypertext, to describe and define associations for documenting the past. Therefore digital history requires forming “a framework, an ontology, through the technology for people to experience, read, and follow an argument about a historical problem”.[1] At the same time, scholars emphasize the need for developing undergoing experiments on digital approaches and tools into permanent platforms.

Lviv Interactive is a project based on creating such an integrative platform for research and presentation of the city’s complex past. It is an online encyclopedia showing the city and its history through places and spaces. Since 2007 materials on over one thousand objects have been prepared. While continuing to accumulate various primary and secondary sources and tools, it was decided to have a comprehensive look at one of the integral parts of such a framework in digital history, i.e. the database.

Taking occasion of presenting the project at the poster session of the International Public History Conference, on June 5-9, in Ravenna (Italy), we prepared a 2D visualization of the Lviv Interactive database. 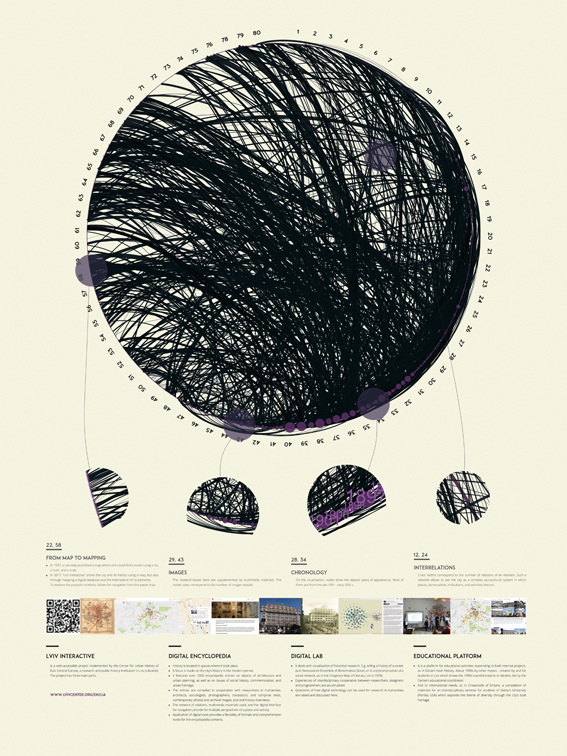 What Is on the Poster?

It seems inevitable for understanding how digital tools can be used not simply for creating a digital list of objects, but for presenting a cultural phenomenon such as a city. We also want to understand the nature of a database in terms of incompleteness and impartiality. Having this understanding enables one to develop digital and visual history projects that deepen our understanding of the past instead of its replication or modeling.

The digital encyclopedia brings less linear experiences than the traditional act of reading. Through the user’s interaction it facilitates various scenarios of exploring and studying new cultural forms such as a database. A number of these scenarios and consequences of user experiences are directly affected by the extent to which the interface is comprehensive and user-friendly. A clear navigation system is one of the project’s current tasks.

For the poster purposes, however, it was decided to use a city map of Lviv, a supplement to a local newspaper (1936). The map also included a list of streets and a ruler on top of it. You could find any desired street at the intersection of numbers from the ruler and from the scale in the mar9gins.

What the Data Visualization Implies?

Each fragment describes some of the project aspects.

The Chronology part presents our main focus – most of the objects refer to the late 19th – early 20th centuries. We employ numerous research interests of the researchers who cooperate with the Center for Urban History. For example, the encyclopedia includes information on the early modern period as well as on the Soviet period.

Themes are related to architectural history, urban planning and heritage, cultural and social history, particular attention is devoted to the subjects rarely explored by scholars. While the architectural layer is rather comprehensive, the importance of adding personalities and their histories, as well as activities becomes more prominent so that the history of the city could be explored as a constructed whole and as a cultural phenomenon.

The Images part tells more about multimedia nature of the project and about different media and sources it is based on. An object’s size means the number of related images, i.e. documentation of its current condition, historical imagery from the Urban Media Archive (another digital project of the Center for Urban History), and archival drawings which help us to study architectural planning details, ownership, and social history of the object.

The Interrelations part brings up yet another key aspect of digital projects. The width of each line explains the number of an object’s links with other objects. According to John Law, the form and attributes of an entity is a consequent result of relations with other entities.[2] Therefore, interrelations mapping is among basic steps to understanding which attributes were acquired and which form was taken by entities. Following the actor-network theory, human and non-human actants are supposed to be equally considered in such heterogeneous networks.[3] So the focus on a particular building is also a focus on wider networks of personalities, institutions, and activities. It is not only relations density but also the character of relations that becomes important. Therefore, the project is based on developing a more flexible database so that we can not only research and visualize a list of personalities related to a particular building, but also explain the type of these relations (i.e. architect, owner, resident etc).

The project experiments with analysis and visualization tools of historical data using digital methods. Within the research project Imaginary Map of Literary Lviv +-1939, based on memoires, a network of the city’s literary life during the consolidation of the Soviet rule was constructed. We have been experimenting with storytelling tools in order to appeal to different audiences, such as in the history of Bohomoltsia street, a Secession architectural ensemble which is a prominent monument of urban planning in Lviv. Or virtual walks such as Past, Present, and Memory: A New Perspective on the Jewish Lviv Past.

We regard the Lviv Interactive also as an online platform for education, both at the Center for Urban History (program Far Near History. On the 1990s in Another Way), and in partnership with other academic institutions (Crossroads of Empire, materials for an interdisciplinary workshop, Stetson University (USA).