The camera protects me as a photographer. It creates a shelter between emotional situations and me. (Andree Kaiser)

Andree Kaiser (*1964) was trained as a photographer in Pankow, a district in East Berlin. He served a prison sentence in various detention centers of the State Security Service, commonly known as the Stasi, for his attempt to flee German Democratic Republic (DDR). Kaiser got out in 1986 as part of a prisoner release. He started his photojournalism career at Reuters in 1988 and afterward joined several agencies, which resulted in several assignments with travels to eastern European countries. Between 1991 and 1993 he conducted several reportages in Bosnia, Croatia, and Serbia for Newsday (New York). His photos following the breakout of the war in former Yugoslavia had been featured in international exhibitions: “Faces of Sorrow: Agony in the Former Yugoslavia” at the US Holocaust Memorial Museum, “Crimes of War” at the International Criminal Tribunal (The Hague), “Yougoslavie: Déchirures” at SIPA Press in Paris. Decades after the Bosnian War, the US Holocaust Memorial Museum hosted Andree Kaiser’s pictures coming from Syria. He went to Azaz, Bab al-Hawa, Asseharia to witness with his camera another war tragedy and another spectacle of horror.

Beyond Words and Pictures

For about three years in a row, killing, bombing, destruction, and forced displacement was taking place in Bosnia. The Siege of Sarajevo was the longest in the history of modern warfare, and people were killed and tortured just for belonging to a different religion or ethnic group. In the 1990s the world silently watched what horror was doing to the country and its people – and only a few wanted to get closer. At first, Andree Kaiser did not have the feeling that his work and presence with Roy Gutman would be taken seriously. At that time, Kaiser was in his late twenties, and never had any formal training to adopt the skills that photojournalists and reporters on the front lines have. However, the motive was strong enough:

The main interest was people and their stories. We went to the detention and concentration camps, where men and women were held, tortured, raped and killed. The motivations were the rumors and the stories coming from these horror camps that everyone was hearing about, without really knowing what was going on there. We wanted to be (eye)witnesses and to change something on the ground, by sending out the horrifying truth of violence and atrocities. 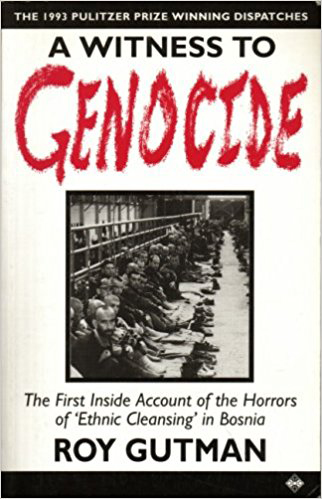 And they did: Roy Gutman with his words, and Andree Kaiser with his photos. Through their coverage of the war in Bosnia, they provided the first documented reports of the atrocities committed at the death camps and other human rights violations. It was a courageous and persistent reporting that helped to push the international community to take an action in Bosnia. Their teamwork had been awarded the 1993 Pulitzer Prize for the book “A Witness to Genocide”, in which a series of reportages and accounts catalog the brutality of the Bosnian war.

It took some time to build and strengthen a relationship of trust for a conversation with traumatized people, especially the Bosnian women who went through, and survived, the systematic rape and forced pregnancy:

A camera cannot catch the tears running down their cheeks, neither the power of their silence while looking at each other and holding hands. A snapshot cannot seize the screaming silence of a Schicksalsgemeinschaft: Everyone of them knows what happened, but none of them dares to speak it out loud.

There are moments and events one cannot describe or put into words. However, photography possesses the power to do it.

The Territory of Emptiness

Despite the supremacy of death everywhere in a warzone, pictures could make certain moments and people immortal. Andree Kaiser acknowledges never having taken a picture of a Dead: Die Würde ist extrem begrenzt. One could be content with silence that reveals the humanity of the moment. Only once has he taken such a picture, he recalls:

During the Siege of Sarajevo, I was at a cemetery where many bodies were waiting to be buried. Suddenly, a lady came closer with a small coffin: that of her three-month old baby. Her newborn did not survive the Siege and the lack of medical care and supplies. Having seen my camera, she asked me to photograph her child, who was soon to be buried. She did not have any picture of him. And I did it. Later, it was a difficult task to find her again and to hand her that photo which fulfilled her wish.

Wishing to share people’s daily lives, their worries and fears, Andree Kaiser would call himself an observer. A witness faced by the momentum and promptness of decision-making, while being exposed to significant obstacles, sometimes risking his own life, in the case of armed conflicts. When war breaks out, there is always a (motion) picture of destruction to see. Kaiser witnessed the devastation of the national library in Sarajevo and was stunned by the fact that documents presenting the history and identity of a country and its people are turning into ash. The destruction of a building is like tearing a human body apart. He photographed the bridge of Mostar, which he witnessed collapsing the following day. It was like a thin thread that was holding two parts and two people together. Andree Kaiser knew Sarajevo before the war: a vibrant and multicultural European city. During the conflict, the Holiday Inn in Sarajevo was a hub for reporters and journalists who were covering the Bosnian war. There, one was grateful for having a (relatively) safe roof over one’s head, some electricity, and something to eat. The waiters and the hotel staff, with their tidy white shirts, preserved a sense of normality. Yet, he decided later to spend the time – and money – with a family.

Sitting in a circle, with the shelling outside, knowing that you are still alive just because you have not (yet) been affected. Still, you know that at any moment, it could be you. The old man, the head of the family, took some of his old music records. And you end up listening to Frank Sinatra’s New York! New York! That was a pure “Galgenhumor”.

In Bosnia, he had the feeling of being welcome, and that people were glad to see someone coming to witness and document the tragedy that was taking place. Being a photojournalist in a conflict zone granted him security. Although he indispensably needed translators in his work, he managed occasionally to get in direct contact with people using his English and Russian skills, and even sometimes the German ones. He did not feel completely a stranger there. Yet, in Syria, it was another story.

While watching the first demonstrations in Homs, Andree Kaiser recalled the days in the DDR, where the peaceful calls for freedom and social equality were harshly repressed. However, the crisis in Syria has developed in a much cruel way. Kaiser had never been to Syria before the war, so he cannot tell how the protracted conflict is transforming the country and its people. Trying to reconstruct an image of that, once upon a time peaceful, place is hard when one first know it in the light of the actual conflict. At the moment Kaiser reached the Turkish-Syrian borders, all he can remember in a flashback, was a shock:

A destroyed border station … Burnt down tents … A flag of the Syrian Free Army standing in the middle of nowhere … Young people sitting on a sofa … Masked militants, all in black with a cartridge belt, who, after removing their masks, were just teenagers that could go play football with their mates.

With Roy Gutman, now a foreign editor for McClatchy in Istanbul, a new opportunity to work together presented itself, again in a conflict zone. But on the ground in Syria, not only language was completely strange to him. In every situation, and on every checkpoint or stop, where a discussion is needed or taken place, he was always feeling uncomfortable and suspicious: to what end these incomprehensible talks around him? Moreover, a western journalist was immediately identifiable, which created an attitude of suspicion and caution, making the already risky situation even more dangerous. Kaiser did not just feared being taken for a spy – even worse: to be considered as a commodity for ransom money: the fate of many western journalists in Syria, who some of them never returned back home. 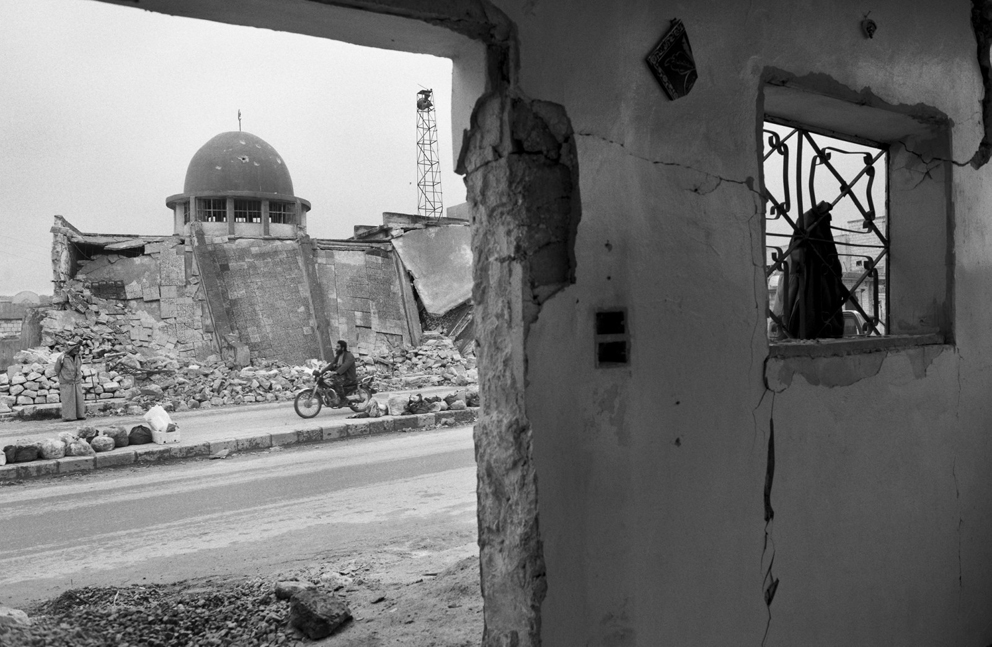 Andree Kaiser, Syria © by courtesy of

In the camps of the displaced Syrians, Andree Kaiser witnessed not only their predicament but also their strong will to live and to survive their tragedy. Under the precarious living conditions in the camps in Bab al-Hawa, even the daily life routine had become a struggle. Yet, everyone tried to create a sense of normality: a teacher gave classes; a barber cut hair, and parents hoped to provide a normal childhood for their children under these inhuman situations. He recalls being invited to enter the houses to chat with them:

The hospitality was astonishing. Being allowed to enter their poor shelters and houses, being offered all the (very) little they had to eat, made me speechless.

Living with and beyond Memories

Whereas language structures our thinking, the accounts of images shape the understanding of certain moments or events in history. When violence becomes a part of a place’s narrative, images depict and reach a wider audience beyond the barriers of languages. Decades ago, the world silently watched the stories of horror coming from the Bosnian war, and with the Dayton Peace Agreement, as a “Zwischenlösung”, the war in Bosnia is now a (haunting) memory. Today, the world is catched up by the Syrian conflict:

Once a tragedy is experienced, it leaves many underpinning memory moments. Andree Kaiser went back to the Stasi prison, fifteen years after his release, and to Sarajevo fifteen years after the war. With the protracted conflict in Syria, Kaiser still wonders when he would be able to go back there, and what pictures he would then take.

Although conflicts and daunting experiences differ widely, and each one could be understood only in its own context, there are incidents that emerge in a flash when the present feels like the past: a sort of déjà vu. For Andree Kaiser, and his camera, memories are passed from one conflict to the next while picturing violence from Bosnia to Syria.