Art moves away from reality and invents something that maybe ultimately more accurate about the world than what a photograph can depict.

In times of wars and conflicts, the words of Zinn have a deeper meaning. Through art visual dimensions and aspects can be explored that are often missing from written reports or captured snapshots. This can be an image documentation or a reminder of how war shapes lives and places. In his set of etchings and triptych Der Krieg, the German artist and WWI veteran Otto Dix showed firsthand hellish visualizations of the horror he experienced as a front soldier. In response to the bombing of the Basque city of Guernica during the Spanish Civil War, Pablo Picasso created a masterpiece – and perhaps his most famous work ever: Guernica (1937) was regarded by many art critics as one of the most moving and powerful artistic anti-war statements in history.

Since 2011, the protracted Syrian conflict has changed places and people and created strong memories. It is regarding by many as the best documented war ever. The work of Nizar Sabour should be seen in this context: it’s worthy of note.

Born in Lattakia (Syria) in 1958, Sabour graduated from Faculty of Fine Arts in Damascus in 1981 and earned his PhD in Sciences of Art in 1990 in Moscow. Growing up between two worlds, the urban and the rural, has strongly influenced his imagination. For Sabour, cities are not just a physical configuration of administrations planning laws and systems. Cities are images in motion: Manifestations of time and history. He began his first work on cities in Syria and pursued it during his academic stay in Moscow, were he produced his collection the Form of the City: an interpretation of history, a nostalgia-soaked memory: a longing to his ‘Orient’; and a desire for a splendor far away from conflicts that ravaged the Middle East in the 1980s, where the cities began to lose their beauty. Nizar Sabour is currently professor at the University of Damascus and at the University of Kalamoon in Deir Atiyah/Al-Qalamoun (Syria). He had several solo and joint exhibitions, and his works can be found in many private, public and museum collections in the Middle East, Russia, the U.S.A. and Europe.

Every city is in itself a unique experience. It is more than just a place where one lives, works and dies. What makes a city remains in the memory are little, hidden and sacred features, strongly related to us as people. Every city I draw has unique form, content, shades and even mood.
Nizar Sabour

Memories lead Nizar Sabour back to a small icon in a cave-like opening in the wall at his parents‘ house. In front of this icon stood a simple vigil oil lamp, whose flame always burned and gave radiating light. Sabour’s works contain spiritual undertones based on his fascination with religious iconography and various features of the Syrian heritage. They all found their way into his works through several media, triptychs, engraved wood, gold leaf, ash and sand.

In Syria, his cities were colorful and vivid. Today, these paintings offer a nostalgic retreat at the sight of destruction and ruins. Sabour’s paintings have become a beacon of hope and an expression of a wish: if only these places, and their people, did not know the hell of war. The protracted conflict has affected lives of all Syrians in very different ways. Everything has changed as if life before 2011 was just an illusion.

Located to the northeast of the Syrian capital Damascus, Al-Qalamoun was known for its mountainous topography and dispersed small towns. Among them, Ma’aloula is certainly the most famous town with its houses on the slopes. It has a history that spans several centuries with a Christian heritage and tradition: monasteries, shrines and sanctuaries. Whether Muslim or Christian, many pilgrims came to Ma’aloula to receive blessings and make sacrifices. Before the civil war the town was a major tourist attraction.

Ma’aloula is believed to be the only place where Aramaic language – that of Jesus Christ – is still spoken. This is the most distinctive feature of the town. Perhaps the remote and isolated location of the town preserve the language while Arabic is spoken everywhere else in the major cities.

In the past, the houses of Ma’aloula were mostly painted blue. Many of the houses are scattered over the cliff as if they were floating in the air or rising out of the rock, and the people there have survived in the mountainous and dry landscape for centuries.

In September 2013, Ma’aloula became the scene of a battle that began with a suicide attack by truck at the entrance of the town. People were killed; others fled; and nuns were kidnapped. During the violent clashes some churches suffered heavy damage e.g.at the altar, crosses fell out of the dome and wall paintings were destroyed.

Ma’aloula is strongly associated with Christian martyrdom and miracles. During and after the attacks in 2013, Nizar Sabour depicted war, darkness, blackness, fire, and ash. The wooden frame was painted with saints, spiritual symbols and icons, all trying to save the town.

Certainly, 2013 was the most dreadful year on Syrians: fear, death, displacement, and the lack of answers to many questions. Nizar Sabour wanted to depict this state of insecurity, and so came the idea of “The Book: The Guardian of Life and Death”, in several themes. Each book has seven wooden plates and a wooden cover. 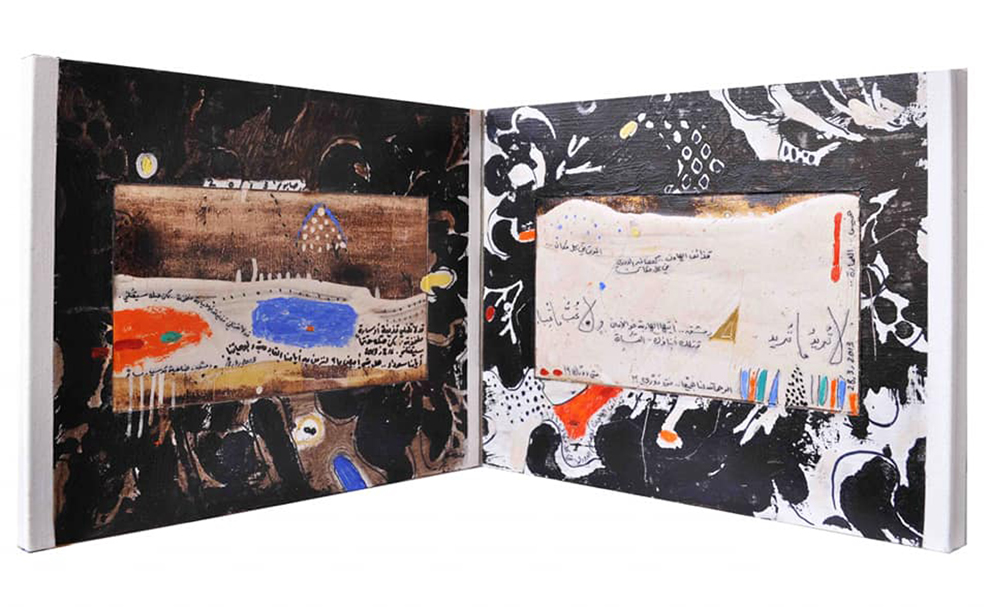 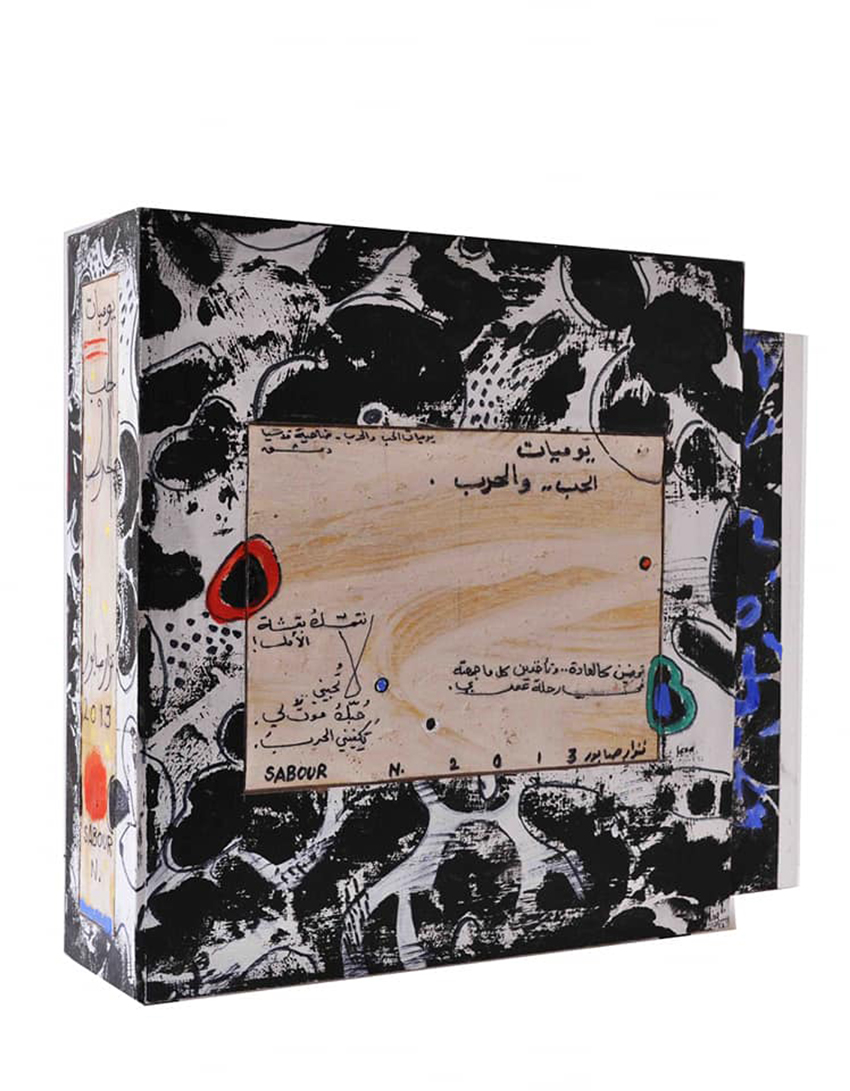 In “Diaries of Love and War” Nizar Sabour set out to document what he experienced in Damascus during that brutal period of time, through colors and words:

In Damascus there are more mortar shells than sparrows …
Despite death and destruction, the spring is back …
We grasp at straws (of hope)…
Nizar Sabour

The war has left marks in the cities of Syria and scars in the souls of the Syrians. Like many others, Nizar Sabour is doomed to be hopeful. Today, there is a new statue of the Virgin Mary in a blue robe – Our Lady of Peace – again high overlooking Ma’aloula to replace the one destroyed during the attacks. And Damascus has slowly started to greet the long-awaited sparrows.