Compilation of the UNFCCC (United Nations Framework Convention on Climate Change) on the 1st day of COP21 in Paris, UNclimatechange, Source: Flickr CC BY 2.0

On the Place du Panthéon in Paris, twelve massive chunks of ice, arranged in a circle like the numbers on a clock face, slowly melt. These pieces of Greenland’s ice cap have been transported here on a container ship to be placed here, in the middle of Europe, as a symbol of climate change. And the timing is no coincidence: not only is the 21st United Nations Conference on Climate Change (COP21) being held in Paris right now, but in parallel, not far away, the first Climate Summit for Local Leaders is being hosted by Paris Mayor Anne Hidalgo. Co-host of the event and sponsor of artist Ólafur Elíasson’s Ice Watch installation is multibillionaire Michael R. Bloomberg, who has been appearing at climate summits for years to advocate pro-business and pro-market measures against the climate crisis. But Bloomberg has been criticised by journalists and climate activists alike for various reasons, including his extensive investments in the fossil fuel industry.

Also the target of some criticism is the CO2 footprint of Eliasson’s contribution to the climate summit, to which the artist has responded by donating to an environmental group which is a variation on the much-criticized “carbon offsetting”. This is just one of many examples of climate summit art; in this case drawing on concrete climate policy practices (compensation of CO2 emissions) for artistic expression. Another characteristic feature of climate summit art is the artist’s cooperation with economic and political actors, as a result of which the art takes on an advertising function for the sponsor, and this by no means as an afterthought: for example, in the case of Ice Watch, to give Bloomberg a very public foundation on which to base his supposed commitment to protecting the climate. 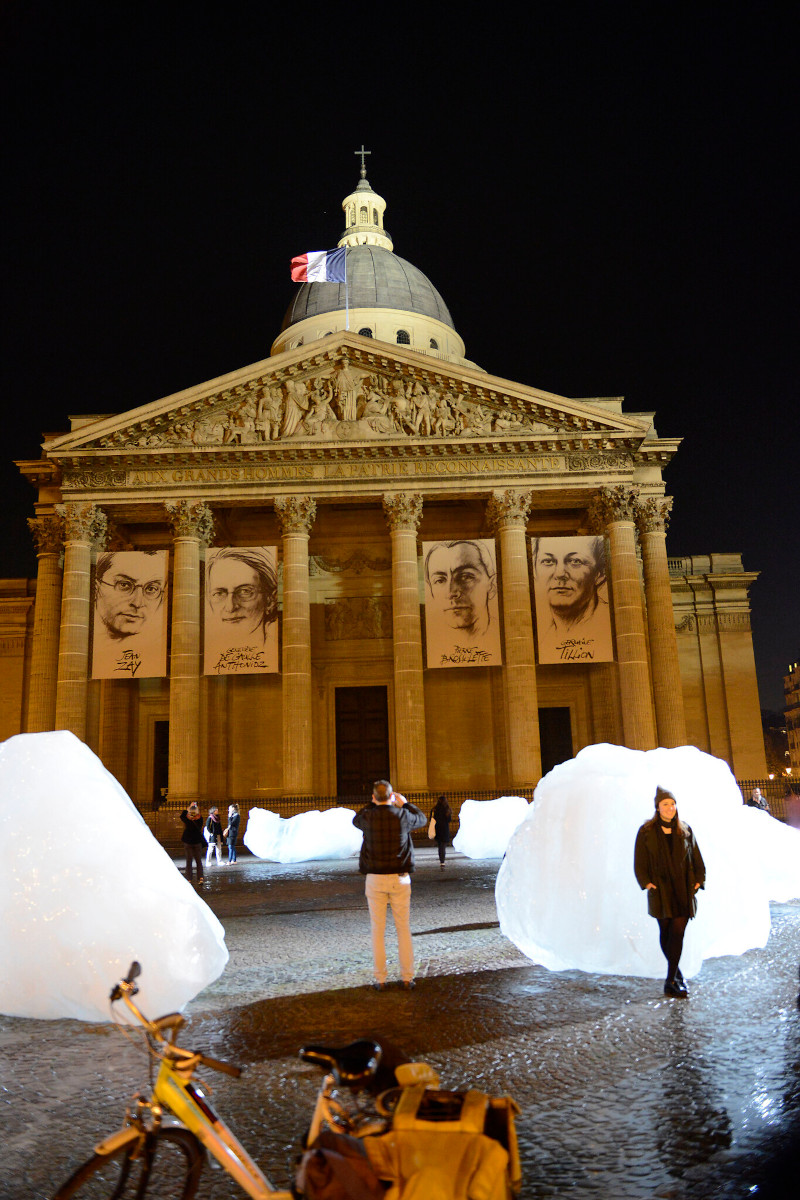 Even the very first UN environmental conferences served as a platform for artists to create works conceived for these political summits, both to highlight the climate issue and to do so using the occasion of the summit. Between 1972 and 1992, the meetings on the environment and global development were held at intervals of five to ten years; but beginning in 1995, the Conference of the Parties (COP) shifted to an annual schedule for the meeting of the international negotiating forum of delegates from politics, science, business and NGOs tasked with agreeing on measures to address climate change. Over time, art projects and exhibitions, as well as artistic activism, have become a standard feature of this context and a constituent element of the summit as mega-media event. Art, in its most diverse forms and expressions, typically occupies the urban spaces and institutions surrounding the action of these conference events. This phenomenon and its history have yet to be studied.

The project is, therefore, the first to examine climate summit art as a corpus, with the objective of deriving specific aspects and developments that are characteristic of the developments in the relationship between art and politics, society and the economy since the 1970s. The task is to, against this background, explore the positioning and institutionalisation of art in the context of the political summit. In workshops and collaborations this theme will be extended to other events, such as art projects on the occasion of G8 and G20 summits, meetings of the World Economic Forum or political and institutional anniversary commemorations.

One of the primary interests of the project is the underlying political, infrastructural and material requirements of art presentations, including an ongoing evaluation of the social characteristics of the artists and other participants in the broadest sense. For example, the project considers the questions of whether climate summit art is dominated by actors from the Global North, and whether the relationship has changed over the course of 50 years of climate summit art (and if so, how). The project utilises a database listing all the projects examined and clearly cataloguing additional information such as the artists’ places of origin and work, pieces that have been exhibited more than once, and individual funding institutions. At the end of the project, the full list will be published as a catalogue.

The goal of the planned monograph is not to provide a complete overview of the history of climate summit art; rather, it is to explore this art through points of thematic focus, for example, the artwork’s relationship to the context of the historically specific political and social debates of its time (like the artistic framing of the overpopulation discourses of the early 1990s). With this approach, the study provides a response to an essential methodological desideratum in art history: an analysis of contemporary artistic and curatorial projects both in their institutional, physical location and within cultural policy funding programmes as well as under their extended social conditions, in order to gain a differentiated view of the conditions of their exhibition and the artistic practices in the Global South and the Global North. Alongside the institutions of art and culture, the project also looks at the “non-art” actors appearing in the form of art promoters and who, through their selection and mediation of projects, have a decisive hand in determining the artworks that will become visible to the public, and how they do. In addition to foundations, non-profit organisations and NGOs, the project also examines sponsorship by multinationals, to ask specifically how and with what interests corporations are promoting art within the summit context. It analyses the relationship between art and sponsor: the themes, content, aesthetics and ideologies being conveyed through climate summit art. These examinations are framed in the context of debates around the topics of corporate social responsibility, “social license to operate” and “greenwashing”, which often raise penetrating questions about activities like corporate lobbying at summits and corporations’ positioning within current climate policy and debate.

The project also highlights the discussions on the supposed power of art in relation to the climate crisis to explore the associated rhetoric and its embedding in the various “turns” (instrumental, social and ethical) in cultural politics, art, and art criticism. Further, the project explores recurring motifs and materials (like melting ice) and themes (such as migration), as well as specific artistic strategies (like participatory, donation-based art), the integration of climate policy guidelines into art practice (carbon offsetting, SDGs, etc.) and the reception and dissemination of climate summit art in the media.

With this as the background, the study promises to not only present a new look at the phenomenon of ecologically engaged art, but also explore the history of the political functions and uses of art, as well as the phenomenon of the globalisation of art, within a fifty-year historical framework (1972–2022) and the context of the international venues of the summits. Overall, from this project emerges a model study for a context-conscious art historiography that combines art and cultural-historical analyses with sociological and political-historical questions.

funded by the Deutsche Forschungsgemeinschaft (DFG), 2021–2024