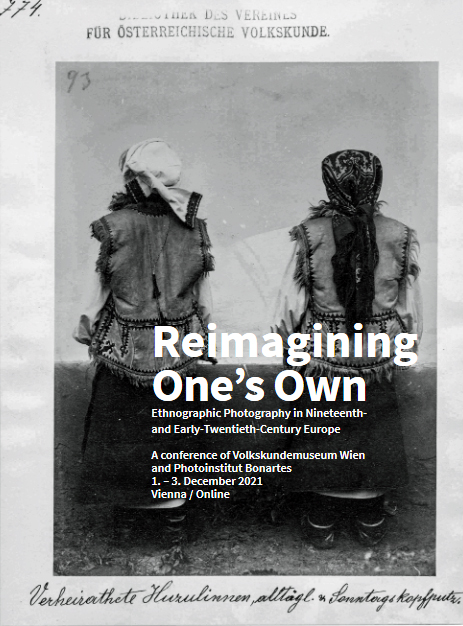 The photo collection of the Volkskundemuseum Wien was established along the lines of a “comparative ethnology of Europe” in the late nineteenth century, focusing on the territories of the Habsburg Monarchy. Today, the assembled materials raise manifold questions about their origins and, as a consequence, about the visual ethnography of “one’s own”.

Just as colonial ethnography created an image of the “others,” ethnographers and folklorists in Europe approached their “own” populations within the continent. The work here is always asymmetrical; it was the ethnographers and photographers who determined what the image of those studied by them looked like. Ethnography at the time conceived “people” with a respective essence in mind. It designed primitivizing and exoticizing typologies, such as in the form of so-called type photography—a genre of images that circulated far beyond the narrow scientific context and could serve the most diverse purposes.

In these photographs, scientific, political, and commercial interests interwove to form imaginary spaces that unfolded their effect in nationalist, imperial, but also tourist discourses. They were used to “preserve” what was about to disappear and to support a wide variety of arguments. They predetermined who was to be seen in which role and who remained invisible, and distinguished between “one’s own” and the “other”. Ethnographic photography depicted its object but also constructed it in doing so. It contributed to the constitution of the scientific subject of “one’s own people”.

The conference is less concerned with motifs than with the genesis and the use of these photographs. How did the construction, production, and commercialization as well as multifariously intersecting interests entwine? How did these images contribute to defining the institutions, networks, and infrastructures in which they and other media circulated? How were the respective typologies used as common space to negotiate culture and politics? And how do museums and archives deal with these records today? How can they be shown and exhibited at all?

The conference takes place online via zoom. No registration required for online participation via live stream.
Link to Webinar
(The hybrid event on-site originally planned is cancelled due to the current Covid-19 situation.)