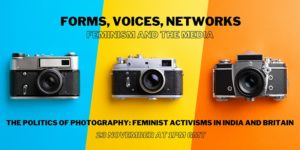 The Politics of Photography:
Feminist Activisms in India and Britain

The panel brings together the leading photographers, artists and activists, Sheba Chhachhi and Mary-Ann Kennedy. With discussant Na’ama Klorman-Eraqi, Chhachhi and Kennedy will draw on their creative practice to consider the diverse and changing ways feminists have mobilised photography as a form of political activism from the late 20th century to the present. The discussion addresses how feminists have interrogated and re-imagined the role of photography, subverting dominant historical narratives, renegotiating the relationship between the photographer and the photographed, and envisioning feminist futures: what kind of history does the photograph tell? Who or what is included – and who is not? What – or whose – claims does the photograph inscribe?

The event The Politics of Photography: Feminist Activisms in India and Britain explores the use of photography as a tool of feminist protest and mobilization. Featuring artist/activists Sheba Chhachhi and Mary Ann Kennedy, and discussant Na’ama Klorman-Eraqi, the discussion will be held on 23 November at 1pm GMT. Read more and register for this event here